The most common way to do coaching is one-on-one. But is that always the best way? Walking with others who are on a similar journey can be powerful. I’ve found that another strategy that works well—coaching one-on-three, what I call coaching clusters.

As a coach, I have each person prepare individually. Then during a 90-minute session, I coach each person for 30 minutes, leaving a bit of time at the end for prayer and comments from others. Then we rotate to the next person. There are numerous advantages to doing coaching in this way including observation, efficiency, and supportive community..

When meeting as a coaching cluster, each person not only gets 30 minutes of coaching for themselves, but they also get one hour of observing good coaching. As a coach, you’re helping to train people in coaching. As they develop, you might say to person B: “What would be a good question to ask at this point?” Through observation, participants are being equipped with coaching skills and can then go on to coach others.

Efficiency is another benefit. Because they are only getting 30 minutes of personal coaching, the cost per individual should be less. This opens opportunities for coaching to those with a more limited budget. Additionally, when you cluster people who are on similar journeys aspects of each person’s coaching will be applicable to the others. They learn from one another by hearing what others are working on. The added benefit is that sometimes it is easier to understand concepts you need to grasp as you watch others walk through them. 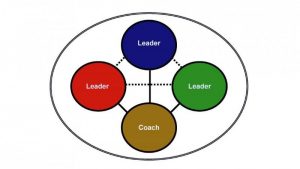 I’ve also seen how powerful it is for groups like this to form a supportive community. Depending on the situation, the group could even meet together without the coach to process with each other. It’s a powerful way to get people connected and supporting one another as they work toward their goals.

Although I’ve tried coaching one-on-two, I’ve found that it doesn’t work as well. Invariably, one is doing better than the other or one is more experienced than the other. Coaching two people at the same time creates imbalance and invites comparison. Coaching four at once is too big, unless it’s a team and they’re all focused on the same agenda.

Three seems to be just right.

Photo by fauxels from Pexels

That was a great coaching moment!

Steps to Help You Make Decisions with God

You’ve got a big decision to make. When you make a decision based on the human intellect alone you might come away with a “good decision”; in contrast, when you consider God’s perspective on a matter you engage the spiritual dimension. This will lead you  down the path of prayerful decision making.

Can you find coaching in the Bible?

If you are trying to help others understand the biblical basis for coaching, here are two key scripture passages to help.

You may be wondering if coaching is biblical. The Bible never commands us to coach. In fact, the word coach is never used. So why coach? Should we even coach? Here are 9 ways coaching aligns with biblical principles.

The #1 Secret to Raising Self-Led Adults

You want your kids to become self-led adults. People who make good decisions, live into their gifts and talents, and contribute to their communities. The teen years are when the rubber hits the road.

Purpose-filled Conversations with Your Teens

Conversations with your teens can feel one-sided. There are a lot of grunts and minute head nods, or if you’re lucky–one word answers. But this is a time in their development where they make important decisions that have lasting consequences. So, how do you move past casual chats to more meaningful and purpose-filled conversations with your teens?

5 signs that you could be a better coach

You’ve been coaching for a while now. You may have even completed coach certification; but you feel there is something more… Are you coaching at your optimal level or could you be a better coach? How do you really know how well you’re doing?

5 Steps to Clarify Your Values

Having trouble moving forward in your ministry goals? What about those you serve? If you are struggling to fill seats and find volunteers the issue may not be WHAT you are doing but a disconnect from the WHY.

Learning to trust your coach and your team

Are you at the top of your game? Even if you are, are you ready for what’s next? So many gifted and purposed pastors burn out because they are playing a solo game. Learning how to work with your team raises your effectiveness and reach in ministry.