Are you at the top of your game? Even if you are, are you ready for what's next? So many gifted and purposed pastors burn out because they are playing a solo game. Learning how to work with your team raises your effectiveness and reach in ministry.

Christian Coaching Pioneer, Strategic Ministry Catalyst, Resource Developer, Empowering Consultant : Logan Leadership
It doesn’t matter how good, skilled, or gifted any one individual is—they can’t do it on their own. Many pastors and denominational leaders don’t think they need coaching. But the fact of the matter is that they can be the best, they can be the Michael Jordan of ministry, but they won’t become a champion until they get a coach and until they learn to develop and trust their team. A gifted ministry leader might have an MDiv or a DMin; they might know more about their role than most coaches. But if they want to be champions, they’ll still need to get a coach and trust and develop their team.

Michael Jordan is arguably the best basketball player who has ever played the game. All over the world people have heard of him. In rural China “Jordan rules” can be seen written on basketball backboards. Michael Jordan was a star, the best player on his team—on any team. He could shoot three-pointers and do long slam dunks. Athletic shoes were named after him. He was a leader admired across the world. For the first six years of his professional career, he won scoring titles, defensive player of the year, and many other awards. Yet during those same first six years, he never won any championships. The team didn’t get far. Michael was a star, but not a champion. 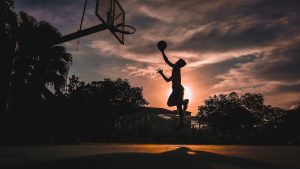 At that point, Phil Jackson became the coach for the Chicago Bulls. Phil taught a system called the triangle offense, which requires trusting your team. Now Phil had played pro ball, but he didn’t have the innate skill Jordan had. He didn’t know basketball as well and he couldn’t play nearly as well. But Phil had a way with the team, and he had a framework that allowed the team to work together within a structure: the triangle offense.

People called Phil the Zen master. He was known for bringing non-traditional methods into his coaching, and he aimed for a holistic experience with his players. He said to Michael, “You’re going to have to trust in me, and you’re going to have to trust in your team. You’ve been trying to do it on your own up until now.” Jordan bought into it, “Okay, I’m going to trust you and I’m going to try it. I’ll pass the ball to someone like Scotty Pippen, who isn’t as good as me.”

The Power of Team

The team took a turn. They began winning and took home six championships in the early 90’s. They became a dynasty. Once they finally started functioning as a team, once Michael Jordan put his trust in a coach, the Bulls were able to make history. They accomplished all they wanted and more. Jordan was a hero as the Bulls went on to win six championships.

Yet Michael never won any championships until he got the right coach– Phil Jackson– and until Phil convinced him to trust his team. He was trying to do it all on his own before.

As a coach, consider ways you can help your clients begin to rely more on their teams and work better together with their teams. What would that look like? What next steps could you take to move in that direction?

If you are ready to up your coaching game, the Christian Coaching Excellence GrowthTrack is for you!

“The Christian Coaching Excellence Track was exactly what I needed. The 360° assessment combined with the group meetings and the one-on-one mentoring helped me to identify precisely where I needed to grow and how to improve my own coaching. I can already see a boost in my sessions with my clients.” —John Fooshee, President of People Launching

Not sure where your place is in ministry? Start here.

What do you uniquely bring to the table? It might be different than it was a few years ago.

How many times have you heard leaders share that they are considering a “new ministry” opportunity? How to help with discernment surrounding transitions.

Money is a touchy subject. But dreams need to be financed so it’s a topic that comes up regularly in coaching conversations. Here’s how to help your client’s align their finances with their goals.

Drop the tasks that are holding you back

Are you feeling like your wheels are spinning but you’re not going anywhere? It sure is hard to stay motivated when you aren’t seeing results. It’s time to examine and drop the tasks that are holding you back.

6 reasons coaching is the best investment

Things are different now—and that make coaching more important than ever. Here are a few reasons why coaching may be your best investment in 2023.

Sharpen Your Coaching Skills in 2023

If the last few years have taught you anything, it’s that adaptation is necessary and good. Finding the best ways to support people and teams in their personal and ministry development is an ongoing, life-long process.

Are you running out of time?

You have so much you want to do but where can you find the time? Here are six things you can do to find the time to accomplish what you really want to do.

Are you struggling to find the right small group curriculum? There are a lot of great programs out there and you may have even tried some but if they just aren’t fitting your context or meeting your needs—what do you do then?

There are ministries and even bible studies filled with Christians who can’t answer the question, “What is God doing in your life?” How can you help them jumpstart into renewed spiritual growth?

You see the same people at church doing the same things over and over again. They are faithful but they aren’t really becoming more like Jesus. How can you as a coach help Christians break out of a spiritual growth plateau?