There’s been a lot in the news lately about living in polarizing times. Polarizing is defined as “causing people to separate into opposing groups.” Matters that are often polarizing include religion, culture, language, race, ethnicity, politics, values, beliefs, identity, and more. Sometimes we are dealing with so many of these different topics at once that it doesn’t feel like we fully fit in anywhere, and it can feel overwhelming and complicated. We long for the “old days.” However, the reality was that the “old days” were often polarizing as well—just in different ways.

Polarization In the Bible

Take for instance first century Palestine, into which Jesus was born. It was a land occupied by Roman soldiers, while the population was primarily Jewish. That alone presents polarizing factors related to politics, ethnicity, nationalism, religion, and military action. Some people wanted to revolt and begin a revolution (Zealots). Others wanted to work within the system (Herodians). Some retreated from society into chosen isolation (Essenes). Others became part of the traditional religious establishment (Pharisees). Yet other religious groups (Sadducees) became more secularized, sometimes allying with the Pharisees, while on a different page theologically.

We also see a society with deep economic inequality, including slaves and masters, prostitutes, widows, orphans, beggars, and rich merchants. Some people were considered untouchable, unclean, or ostracized for some reason… people not to be associated with. Then we have the Samaritans—of mixed race and mixed religion—not to mention the gentiles and foreigners also present among the general populace.

I think it’s fair to say Jesus found himself in a polarized society. The Pharisees and the Herodians even conspired together at one point to trap Jesus by asking him about paying taxes to Caesar, knowing that either answer he gave would be wrong to someone. (Mark 12:13-17)

So how are we to handle the polarization in our own world? How do we engage in healthy ways? In ways that reflect more of God’s Kingdom to others?

Coaching provides us with a powerful tool, in that it isn’t trying to convince someone into a different position or belief but to draw out what is already in a person. We might be able to help people grow in expressing Kingdom values in a way that promotes understanding and lowers the temperature, as opposed to throwing fuel on the fire. 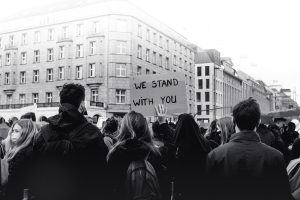 Here are some questions that may help people reflect on and process how they are engaging with others in a polarized environment:

1. Think about and reflect about the interactions Jesus had with different kinds of people. What were the guiding principles that governed his engagement with these various kinds of people?

3. In what ways do your interactions or responses line up with Jesus’s? In which ways are they different?

4. Which groups of people do you have particular difficulty engaging with?

5. What are you seeking to accomplish in your interactions with others? (e.g. to win, to get your agenda moved forward, to encourage mutual understanding, to keep the peace, etc.)

As I think through how to engage in a polarized society, I think one answer is to at least ask better questions. Why not ask others what they are hearing from God? Why not ask them one of the questions above? And then truly listen to their responses?

For the most part, what we’ve been doing hasn’t worked. So let’s try and see if we can try for a more Kingdom-aligned response. I certainly don’t have all the answers. But if you try out any of these questions—with yourself or with others—let me know how it goes. I’m curious what might be different.

That was a great coaching moment!

Steps to Help You Make Decisions with God

You’ve got a big decision to make. When you make a decision based on the human intellect alone you might come away with a “good decision”; in contrast, when you consider God’s perspective on a matter you engage the spiritual dimension. This will lead you  down the path of prayerful decision making.

Can you find coaching in the Bible?

If you are trying to help others understand the biblical basis for coaching, here are two key scripture passages to help.

You may be wondering if coaching is biblical. The Bible never commands us to coach. In fact, the word coach is never used. So why coach? Should we even coach? Here are 9 ways coaching aligns with biblical principles.

The #1 Secret to Raising Self-Led Adults

You want your kids to become self-led adults. People who make good decisions, live into their gifts and talents, and contribute to their communities. The teen years are when the rubber hits the road.

Purpose-filled Conversations with Your Teens

Conversations with your teens can feel one-sided. There are a lot of grunts and minute head nods, or if you’re lucky–one word answers. But this is a time in their development where they make important decisions that have lasting consequences. So, how do you move past casual chats to more meaningful and purpose-filled conversations with your teens?

5 signs that you could be a better coach

You’ve been coaching for a while now. You may have even completed coach certification; but you feel there is something more… Are you coaching at your optimal level or could you be a better coach? How do you really know how well you’re doing?

5 Steps to Clarify Your Values

Having trouble moving forward in your ministry goals? What about those you serve? If you are struggling to fill seats and find volunteers the issue may not be WHAT you are doing but a disconnect from the WHY.

Learning to trust your coach and your team

Are you at the top of your game? Even if you are, are you ready for what’s next? So many gifted and purposed pastors burn out because they are playing a solo game. Learning how to work with your team raises your effectiveness and reach in ministry.